The Trump Presidency will bring back the Trumpover to some Americans

Pretend for a moment and only a brief moment that Mr. Trump has won the elections. 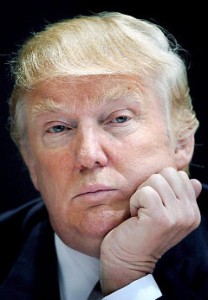 What are the possibilities and how will things actually play out if Donald Trump wins the Presidency.  Let’s pretend for a moment and only a brief moment that Mr. Trump has won the elections and we are looking back a year later in November of 2017 to see the accomplishments, trends in the US and how the Trump Presidency has changed all of our lives for the better or for the worse.

The new trend in haircuts throughout the US is now called the” Trumpover”. Yes people are fluffing up their hair and combing it over to the side with a big old poof of hair.  Laughed my ass off seeing Jimmy Fallon with his new Trumpover.  Hair is definitely “in” at the White House especially since in a surprising move Trump chose Al Sharpton as his running mate. He had to do this to take attention off his hair and put it on someone else. We really wonder how long this team will last and will they can eventually get re-elected.  You know. Hair today, Gone tomorrow.

The Trump Presidency has also changed the snack choices of some Americans; it appears as if many of us are also eating a large amount of Lemonheads candy which helps them to imitate Mr Trumps’ pouty kind of face when he is thinking about something or upset.

The wall is currently being built around the Mexican border as he has kept his promise of sending back all the illegal immigrants and to no one’s surprise it is all brick.  But what was a surprise move, he had Pink Floyd come out and play in the groundbreaking ceremony which showed is sarcastic sense of humor. They changed the first line of the song to “We don’t need no Mexicana’s” and the last line of the Chorus to “We just need a billion bricks in a wall”

All disagreements between Russia and US are now settled in weekly arm wrestling matches between Trump and Putin.  They even did some bare chested at Putin suggestion and now can only be shown late at night so children do not have to be subjected to gross images.

Yes, it has been an interesting year so far and now if we could just get rid of all the damn Green Hats as it reminds me of a Notre Dame Pep Rally.