The Hidden bumps of Becoming a New Comedian

When starting comedy as a new comedian, you get excited and meet new friends—new, funny friends.

We all have done this, like high school kids, we find friends that like us or have similar likes and form a group.

In comedy one of the worst things you can do is create a group of friends whom you only hang out with or do shows with.

Because every time you do a show, you will always use the same people in your group.

I have seen hundreds of good rooms get destroyed by new comedians who start a great open mic room. The first month, everything is great and the room is always packed. However, the following month they start losing people, and they can’t figure out why there is nobody in the room anymore or why the restaurant owner has become fed up and stopped the comedy. 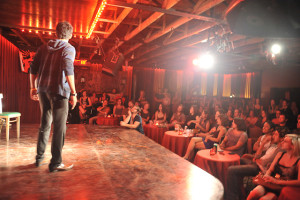 The number one room killer is comedy groups, in which the same people keep trying to tell the same old jokes. Perhaps they have gotten so comfortable that they don’t even care about writing funny material anymore; they get on stage and bullshit their way through their act and bore the audience.

When starting a new room, I have learned to always make sure you get a lot of comedians involved. For instance, you can host the room and maybe rotate your friends to host.

New comedians with new rooms, we love to host our rooms because it’s our room, but sometimes we forget to be original and write new jokes every week. When hosting a weekly room, sometimes it’s hard to come up with new material every week, and you don’t want your small fan base to memorize your whole routine. It’s not like you have a team that writes for you like nightly shows such as Jimmy Fallon or Trevor Noah.

Once more, don’t have a group of friends that you only work with. As a new comedian, spread your wings and work with everyone. You never know who might point you in the right direction when the time comes.

But also in the comedy industry, don’t do something good expecting something in return. Some of these comedians do not know what reciprocity means; they just want stage time from everyone but will never call you back or even remember to put you on anything. It’s all about themselves.

When hosting your own room, always be aware of the fake friends too. People will smile and be so friendly to you and act close to you just to get stage time, but if someone asked them, “Why do you like the host?” they wouldn’t know how to answer, because it’s all fake smiles.

Be aware of these fake friends with fake smiles. The same people want your room. They want your room, and they will go behind your back and try to talk to the club, bar, or restaurant owner to replace you because they noticed your weakness and want to replace you by fixing it. So they mention it to the venue owner or manager instead of sharing it with you.

Example: You live in New York and all of your jokes are about the NY subway, NY homeless people, NY tourists, and NY location… sometimes those jokes might not translate well in Oklahoma.

If you live in NY, go to Philly, DC, Baltimore; go do some stage time, find groups and rooms via social media and invest in yourself if you want to make comedy your career.

Be aware of NY open mics. Most of them do bringer shows for new comedians. You have to invite your friends and family to the show, so it becomes very limited, and by the time you do 2-3 open mics, all of your friends and family have memorized your routine. I’m not sure yet how bringer shows started… I have not done any research about it, but it could be because the host has abused the crowd by putting 20 comedians in one show, or maybe NY only has so much to offer.

Most of these rooms are done wrong. As a new comedian, you approach the venue owner excited and despaired and you end up negotiating some shitty deal. Most of the rooms that I hosted open mics for, I have gotten something out of the venue: $50 or more and free drinks for comedians that are performing. You have to remember, if you host a good show and people are coming to see you, that means the venue is making money. Even new comedians sometimes should at least get one free drink; instead you end up inviting 10 of your friends who pay $10 or more each and all you get is five minutes of stage time… What a rip off.

Then you have Los Angeles, full of talented comedians and a lot of bitters. A lot of comedians, as soon they start making a name for themselves they rush to Los Angeles to make it big: for 20% it works out and for 80% it doesn’t. And what you are left with are bitter comedians that have been doing comedy for over 15 years and are still trying to make it. As a newcomer with less than 10 years, trying to move to LA can be career suicide. It’s like starting a new job and getting promoted to supervisor while someone who has been with the company for over 20 years is your new protégé.

My suggestions, once you have gotten your strong 45 minutes, you should get together with 2-3 other comedians (mix it up: female, white, black, Indian, Chinese) and form a tour.

In the beginning, make sure you have a flexible job that pays your bills, unless you live with family. But make sure you can afford to travel here and there… Anyway, I have many more stories on how to travel as a new comedian, but I cannot cover everything in a single post.