The healing power of humor – Laughter

Ed Blaze here! – My life journey proves that comedy can bring peace and unity to the world.

For some people, the universal language is music, for others it is dance or sport.  For me, it’s comedy. Humor is my way of communicating so I can create a bond with people from different cultures and we learn to understand each other, building a friendship from there. 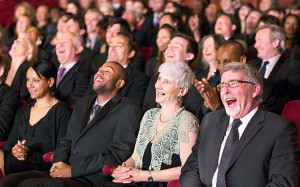 I used humor to settle into my new life in the United States when I moved here from Tanzania.  Whenever I had the opportunity, I’d jump up and try out a stand-up routine.  I didn’t know whether the audience were laughing at my jokes or laughing at my accent, but I felt that sense of unity when they were laughing along with me.  Jokes helped me make friends, and they helped me build a new identity in a place where I had to change my name to fit in.  Ed Blaze is my American name.  There was no point using my African name here, because to Americans it’s just a string of letters with a clicking sound in the middle.  I like to tell people that the night I was born, my parents were playing Scrabble and they made my name out of the pile of left-over letters at the end of the game.

So when I came to America, I changed my name and I had to learn to adjust to the culture.  The first time anyone called me the “n” word was in America – I didn’t understand the significance of the word until it was shouted out to me, and then I understood completely.  It creates a barrier between people, and I’m committed to breaking those barriers down.  That’s the same reason I don’t see sport as a universal language, because sport gives you a sense of belonging by being part of a team.  You want to see yourself as better than the other team.  Comedy and laughter are about bonding people, no matter how different you both are.

At one of my first private shows, I was up on stage with about 120 people in the audience all staring at me.  All of them white people staring at me while I’m up on stage.  It made me very uncomfortable, so I responded with humor, saying I felt like I was up there for sale. And they laughed.  We made a connection, because suddenly they could relate to me.

A lot of my material is based on the difference between my life in Tanzania and America. The audience wants to understand my views and see through my eyes for a while. So I tell them about my home in Tanzania, where I still have family who live in a hut, with no electricity and no running water; the toilet is the bush outside, and even the rats in Tanzania are not like the nice furry rats you have in America.  Our rats are dirty with hair missing and looks like they have bad infections.  My bed in Tanzania is the same goatskin my parents gave me when I was a child – they put it on the dirt floor, but of course now I’m older, most of me is on the dirt floor.  We do have Starbucks in Tanzania, (Jokingly) but they don’t have power.

There are so many different cultures in America, all with our different ancestry, our customs and beliefs, our hardships – we can’t always understand what someone else’s life is like.  But we can reach out to each other through comedy, explaining our lives and our differences through humor.  I say to the audience, “Remember when you were a kid? Your parents would tell you to finish your food because there are some starving kids in Africa? Yeah – That was me. You guys could have sent me some food through UPS Ground.”

After someone has seen my show, he goes away, knowing a bit more about me and next time he meets someone who looks like me or has my accent, he has a positive response as if he’s meeting a friend of a friend.

Can you imagine if politicians figured out this secret?  Maybe our world leaders should consider this approach – bring the fighting factions together to see a professional stand-up comedian.  Chances are good that the two sides would find some common ground through laughter by the end of the show.

And there’s another reason why comedy can change the world – it is so beneficial for your health.  Laughter has been proven to stimulate your circulation so your muscles relax and you absorb more oxygen into your heart and lungs.  At the same time, it releases the feel-good hormone called serotonin into your system.  So you feel a general sense of well-being throughout your mind and body.  Over the long-term, laughter can improve your immunity and even relieve pain.  Best of all, when you’re finding plenty to laugh about, you’re building a good perspective on your life.  You know what’s important; you know that you don’t need to take life too seriously. You are generally more relaxed and at peace with the world. Ref: Mayo Clinic https://www.mayoclinic.org/healthy-lifestyle/stress-management/in-depth/stress-relief/art-20044456

Again, can you imagine if our world leaders tried to work with this formula?  A happy peaceful healthy world, where strangers reach out to make friends and understand each other a bit better.

Well, it might not be happening all around the world right now, but that’s what I aim to achieve each time I do a show. Hope to see you there.