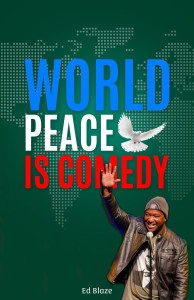 African born comedian Ed Blaze talks about using comedy to cross cultures with the western world and his funniest experiences as a Tanzanian living in the United States in his new autobiography “World Peace is Comedy.”

New York, NY, March 26, 2015 (Newswire) –Growing up as a kid in Africa where opportunities were limited, Ed Blaze made his friends laugh to pass the time in school, not realizing that comedy would be his calling later in life. Blaze’s first book World Peace is Comedy chronicles his childhood in Africa and his life as a stand-up comedian in America, travelling and performing his way across the United States, working with comic legends such as Dave Chappelle, Bill Cosby, Ralphie May, and Jim Gaffigan. The author also talks about a passion for charity, and the motivating belief that comedy is a healing force for people of all races and backgrounds.

“My name is Ed Blaze. I used to have an African name and I thought it was great,” quips comedian Ed Blaze. “Until I came to America and found out it was just a bunch of random letters strung together.”