Inevitable (and impending) fall from grace….com

The folly… the hubris… the oh! so human weakness, the impending disaster… WHERE is the pop-corn ?!

I can’t wait till Di Caprio is old enough to play the epic saga of “TOWER: the rise and fall of The Donald”, with Leo winning a career-crowning Oscar in 2037….

The story? We’ve so seen it untold times before, in a spectrum of variations. Honestly, if this saga were not reality, but say rather a film script making the rounds in Hollywood, the writer would probably be told to tone it down: “your characters are way too stereotyped and predictable, they lack the depth to make them believable. You make this guy, what’s his name… Bannon? Bannon. You make Bannon sound like Darth Vader. Dude, you were supposed to be bringing us a credible political extravaganza. This is tripe.”

And yet, here we stand, the world is watching, and the cameras rolling for the amusement of posterity.
The folly, the hubris, the human weakness… For all intents and purposes, “it’s ‘UUGE…!”

And how will those of us NOT residing in the immediate vicinity of the White House be able to participate in this unfolding drama? Fret ye not! We are given our daily “Donfix” media-clips in the cold, bit-driven colors of a Taiwanese laptop LCD screen, and lo! even on the screens of our cellphones as we drive to work! 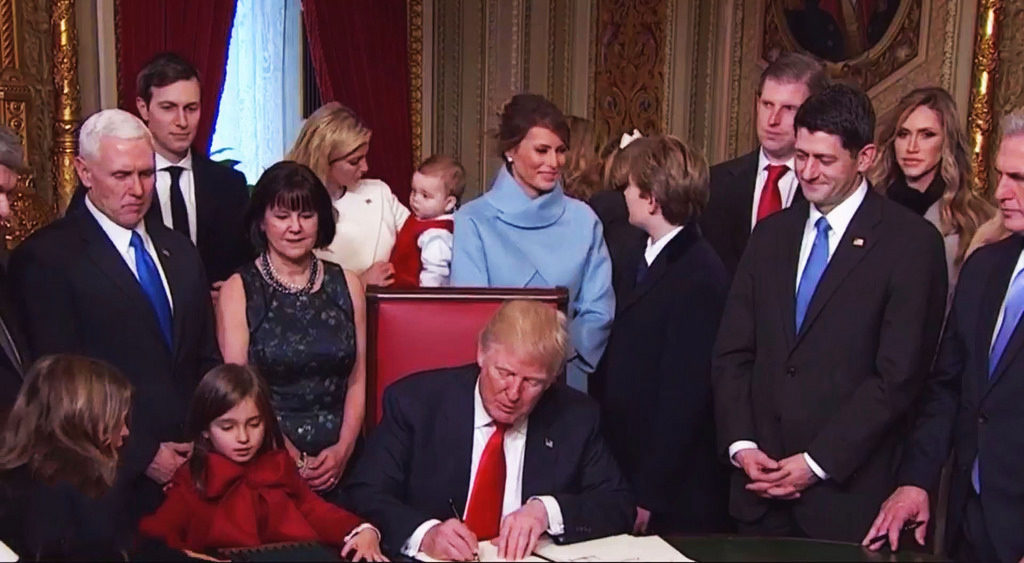 Imagine, back in 1876, had somebody told the inventor of the telephone, Mr. Alexander Bell:
“Cool invention Alex, congrats! Imagine, one day quite soon America will be able to watch their Russian-selected POTUS publicly lose his marbles on your telephone!”, what would Mr. Bell’s expression have looked like??
OK… so his first reaction would probably have been: “What the hell’s a ‘POTUS’ ?”
Then again, imagine if this whole charade was just another current reality TV show (which arguably it IS…). The show just might be called “F.N.R.T.: FAKE News in REAL Time”.

But, as mentioned earlier on, there really is nothing fundamentally new to all this, is there?
This same story of the mighty falling off their galloping hubris? It’s been making the rounds pretty much ever “since homos acquired sapiens”:
“The Rise and Fall of _ _ _ _ _ _”
(insert name as appropriate, e.g. “Citizen Cane”, “Gatsby”, “Adolf”, “Benito”, “Saddam”, “Julius Caesar”, “Jimmy Hoffa”, “William Cosby”… “Jurassic Park”… myspace.com).

And yet initially, after The D’s victory,  we saw (rather predictably I guess) a number of executives and “Captains of Industry” head to his court, to bow before “Le Grande Toupee” His Trumpness Donald the First. These executives included Marillyn Hewson Chairwoman, president and CEO of Lockheed Martin, the world’s biggest defense contractor. Granted, her company is pretty much entirely tax-dollar dependent, so she had to be there at The Donald’s side quicker than you can say “over-budget jet fighter, need-more-cash”.

Andrew N. Liveris, Chairman, president, and CEO of Dow Chemical, was also to be seen at the court of The Donald. And here’s something pretty weird: immediately following Andy’s visit ALL the leaves fell off the trees and bushes in a three mile radius around the White House. Spooky… right?

The Donald was utterly un-phased: “It’s so great. I use ‘agent Orange’ by the bottle, so great… My hair? My complexion? Agent Orange. I love it. Great product, I’m going to show it to Ivanka, she’s going to love it” he explains smiling suavely. But suddenly he looks concerned. “I just wish Andy had told me ‘agent Orange’ shrinks the extremities” he says looking at his hands. “As a kid I used to play ping-pong with my bare hands… and now… look”. His clenched fists look like those of an angry 9-year old. “It actually hurt when Justin (Trudeau) shook my hand, so when Angela (Merkel) came around, I acted like I didn’t hear when she asked to shake my hand. Now she hates me”, shoulders slumped, a defeated 9-year old. Ouch…

But The Donald saga is developing SO quickly, day by day, even minute by minute at times, and there’s no question: The Saga is headed South. Aye… already now there are people who are trying to make signals to us saying “Yeah, I’m standing next to Him, but I’m not really WITH him”. The D should be worried by these signs, it’s not good. But… well… being deranged has its advantages; “it’s always SUNNY at Mar-a-Lago!”  😊

SO…!
WHO exactly are these people making visible moves to distance themselves from The D, in the desperate hope of avoiding being thrown on to the bonfires that are to be kindled pretty much immediately following the imminent and inevitable fall of the first TweetyGram president?

I would posit Melania is the first.
We all saw her on inauguration day. Wow… cows packed tight on a truck backing into the yard of the Rawlings baseball mitt Inc. look more enthusiastic about their prospects than Melania did on inauguration day… Perhaps she’s afraid her hubby’s legislation will make her an overnight illegal immigrant.
Reviewing her prospects, the question “I maast work eshkort egain…?” must be keeping her awake at night…

OK, I actually hate myself for that pointlessly cruel jibe at her. I apologize already now for that one, and I mean it. Poor girl… she thought that all her post-communist dreams had come true; she married the King of America, palaces and servants, diamonds and pearls, crystals and silk, and yet…. And YET, to her horror she finds she’s living in a loveless and deranged nightmare, hanging on to her sanity by her well-manicured nails, her “dreams” in tatters.

To be disappointed, betrayed, by one’s very own dreams, wow… that’s a really bitter fate.
Imagine the little boy who has that wonderful dream of becoming an astronaut when he grows up.
Then, after years of scholarships, gutting hard work and unreasonable sacrifices, comes the day when he  FINALLY finds himself in space. Sadly, this is not the Starship Enterprise he is embarked on; space on this craft is incredibly cramped (and smelly!). Under his suit, he’s wearing a massive diaper, he’s in the throes of gut-wrenching space-sickness, shivering almost uncontrollably as he looks over at Tom Hanks uttering those legendary words: “Houston, we have a problem. Melania has just requested to join us up here…”.
As a kid, falling asleep looking at his model spaceship, this is not quite how he hoped things would pan out.

And now (back on earth again) we’re seeing a growing number of The D’s fellow republicans and Fox news journalists (is that what they’re called, “journalists”? Even if they work for FOX…?) looking, well… “fidgety”. When you see these people, the people who should be the definition of hardcore loyal Donald supporters, discretely scanning the ballroom walls for the illuminated “exit” signs… it’s just not a good omen for the current POTUS. On the surface, they’re still all smiles… yet there is a tangible, and very ominous scent of fear and betrayal in the ranks, a smell that even Ivanka’s signature perfume is no longer able to smother.

So…
Don’t book a room for your holidays at Mar-a-Lago quite yet.
Be patient and wait: in a matter of months you may be able to book the Mar-a-Lago “Presidential Suite” at only slightly more than the price of a room at the local Holiday Inn. Not that the Inn is a bad alternative, and there’s always the added benefit at the Inn that “Kids stay for free!”. However, at that point in time there may also be a new RISK involved with staying at the Holiday Inn: you may run into the first former TweetyGram POTUS in the elevator…