How the Media Can Ignore You: If You Are a Woman

My Article about Cecily Strong 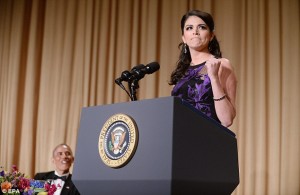 At the recent Washington Correspondents Dinner, President Obama came out swinging against the press and no one was surprised. He even brought along his angry translator, you know the guy from Key and Peele, Keegan-Michael Key. Key did his usual routine, some of it I’ve seen before, as you probably have. It was funny, but it was old stuff.

Nevertheless, Key ended up getting a lot of press attention because of his appearance, but the same cannot be said for Cecily Strong, from Saturday Night Live. She really knocked it out of the park with her intelligent and very funny assessment of Obama, the various networks and also correspondents present at the bash.

Not only was her delivery impeccable, but so was she. Beautiful and talented, Strong’s routine was pointed, direct, and hilarious. Perhaps that was why the press failed to give her the same glowing attention as Obama’s angry translator.

Could it be that Key, in his caricature appearance, was a safer bet than covering Strong who pulled no punches and took everyone on? Or perhaps it was because she had a lot of truth wrapped up in the arrows she fired?

I suspect it’s that and a bit more. Take the fact that she’s a woman, a talented one at that. Strong is intelligent too.

It makes me wonder if it is more painful hearing the truth from a woman as opposed to a man. That was the impression that was left after seeing the lack of coverage on her stellar performance. Only a few of her jokes missed the mark and when she did hit the mark, she was spot on.

Sparse reviews and kudos for Strong can also be attributed to the attendees not being able to laugh at themselves. With a routine that was well-researched, Strong pointed out the abundant flaws of nearly every group present. Her repartee was so quick, witty and fresh; it was hard to keep up with her.

Leaving no turn un-stoned, Strong was hard to ignore, at least during her time at the podium. Yet, the press was quick to ignore her afterwards. Maybe that could was due to the fact that many of the attendees left with egg on their faces.

Why then when a woman takes aim on someone or something, she suddenly is bitchy and threatening? Conversely then, when a man can say the very same thing, why is it no one takes umbrage?

People say they want equality in everything, men and women totally equal in everything. Whether it’s equal pay, equal job opportunities or whatever, being equal is paramount. Still, when it comes right down to it, a woman’s voice is still discounted.

That makes you wonder if a woman could ever be president and get any press coverage. Would anyone take her seriously?

Take Hilary for instance. She is determined to be the next president, but the coverage about her is usually dotted with references about how she looks and not what she says. Then it’s normally referenced to her husband and what he would do. They take Bill seriously, but will that be the case if Hilary wins?

Comedy is a tough career, and in many ways it’s like politics. You put yourself out there. You say what you think, good or bad. The chips fall where they may. Cecily Strong has done just that. She mastered her art and with her keen observations could easily cross over from comedy into politics. Unfortunately, she wouldn’t get much coverage. That’s a darn shame.