American Music Awards 2015: I Loved the Show, But…

I know each American Music Awards brings its own bag of shock and brilliance, but, boy, was I well served by the performance mix we had at the 2015 edition! 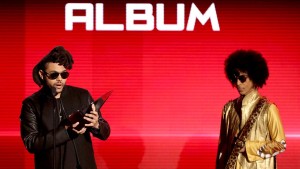 I mean, it was good, bad, average, something in between – pick your favorite. Now, before I start, I just want everyone to know that it’s all love… and comic interpretation of things. So nobody should be offended. No hate emails in my inbox, please.

It was nice watching Jennifer Lopez perform masterfully while hosting the event. She looked gorgeous (more beautiful than some younger women I know); she could make all kinds of tricky but cool dance moves, and sounded as if she had been taking singing lessons lately. Ariana Grande, oh dear Ariana, so beautiful – and she can sing! Meghan Trainor performed her signature moves, and then shocked the audience by passionately locking lips with Charlie Puth. I enjoyed watching her, she can sing and dance, and America loves her songs and sassy attitude…so sexy for someone her age.
I love Nicki Minaj, but she sounded uncanny, like Ronda Rousey before she got knocked out by Holly Holm. Nicki appeared as if she were faking humbleness, saying ‘thank you’ but not really meaning it, considering her facial expression. Sometimes you need to lose some prominence in the entertainment arena to learn humility. People, when are we having another hot female rapper? When?

Macklemore sounded like the best rapper alive, considering the garbage that Black rappers have been releasing lately. I’m talking about those so-called New Age rappers who come out, and you have no idea what they are talking about – poor melodic quality, questionable clothing choices, no meaningful message in the lyrics. They come out and start rapping about money, cars, girls, guns and drugs…but at the same time the whole story doesn’t even connect together. It’s just a bunch of words springing out of their mouths. So when I hear Macklemore’s fans say he is the best rapper ever, maybe they have a point. I’m not comparing him with rappers like Nas, Jay Z or Eminem, but compared to most New Age rappers, he sounds way more appealing – and you actually enjoy listening to him.

Speaking of fashion…boy oh boy, was I served! And well served, by the way! Selena Gomez was “red hot,” with her deep ruby sequined dress! Z Lala…what was that scary octopus thing she wore? Gigi Hadid mesmerized me with her sexy Bao Tranchi dress. Fifth Harmony? Don’t even get me started; the girls just didn’t look cohesive in their respective ensembles. DNCE looked crazy, but fine. Who else? Well, Nicky Jonas, Kylie Jenner, Gwen Stefani, they wore… Well, they wore “things.”

My time’s up, folks! I can’t cover here the fashion choices of the more than 100 celebrities who attended the American Music Awards 2015 edition!